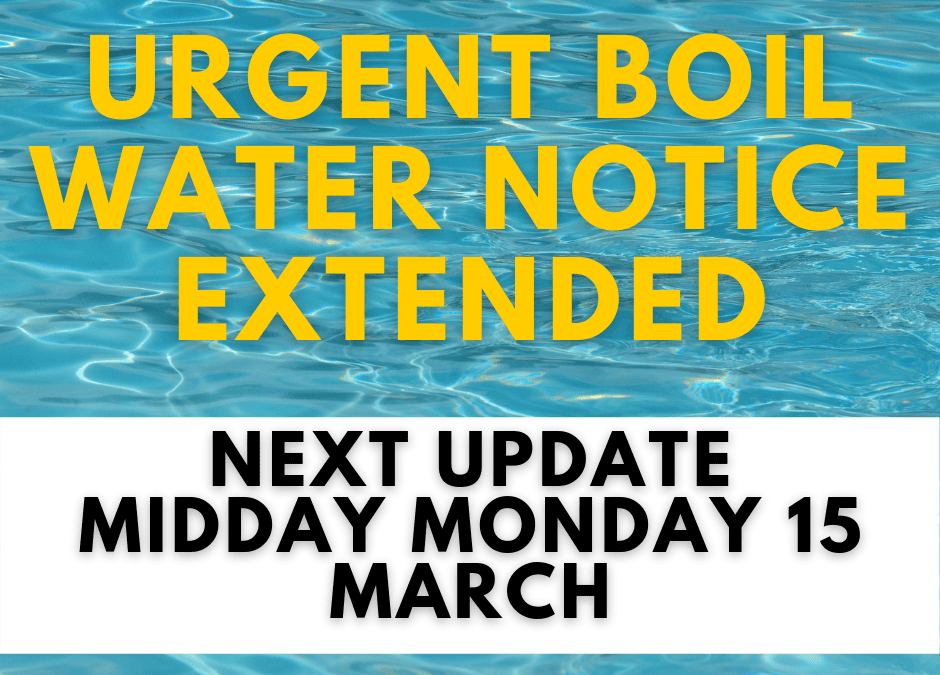 Carterton District Council has extended its boil water notice and will be next reviewed at midday Monday 15 March.

Although the Council has switched over to the Kaipaitangata treatment plant for urban supply, the Ministry of Health has requested the boil water notice is kept in place until the Council receives three clear test runs after the detection of a low-level contamination of E. coli bacteria.

This means all businesses and urban residents connected to the urban water supply must boil all water before being used for drinking, making baby formula, juice, ice, washing fruit and vegetables, other food preparation/cooking needs, or brushing teeth.

The Council acknowledges this will be an inconvenience for many of its residents but remains steadfast to its priority to put its residents’ safety first. The Council’s Infrastructure, Services and Regulatory Manager Dave Gittings said it was important residents continued to follow the boil water notice until the Council notifies residents that it has been lifted.

“Even though the risk is low, it’s really important that people do not get complacent and remain vigilant until the boil water notice has been lifted,” Gittings said.

The Council acted immediately after the test results on Friday, notifying businesses directly, liaising with community groups such as Neighbourhood Support, updating the electronic noticeboard at Carrington Park, and sending the boil water notice out as widely as possible. However, Mayor Greg Lang has asked that people continue to check in on older family members and elderly neighbours who may not be connected online.

“We’re very fortunate that we can spread messages very quickly to a large number of people thanks to email and social media. However, we know that a lot of our residents are not as connected to the online world as others, so we really need those who are to look after those around them,” Mayor Lang said.

“Carterton is a close-knit, connected community and word of mouth is our strongest asset during times like these.”

Mayor Lang also wanted to emphasise the speed in which the Council acted, with staff being alerted to the E. coli reading after 2pm Friday, with the community notified at 3pm.

“Once again the Council management and its staff have taken all the necessary steps to immediately safeguard the community and get out accurate and detailed information to its residents at an impressive speed.

“The urban water supply is monitored and tested daily, so with the speed in which the Council reacted, I am confident there has been a very minimal risk to the community.”

The Council is continuing to investigate the cause of the E. coli reading and will notify the community as soon as there is an update.

Boiling water before use is the best way to make water safe. The risk of getting sick from drinking the water is low but possible, especially for vulnerable people. Babies, young children, pregnant women, the elderly and people who have weakened immune systems are more at risk of illness. If you get diarrhoea, vomiting and/or a fever, get advice from your doctor or contact Healthline (0800 611 116).

How to boil water for drinking:

For more information and to stay up to date, visit cdc.govt.nz/boilwaternotice