Council makes a submission to the Regional Proposed Plan Change 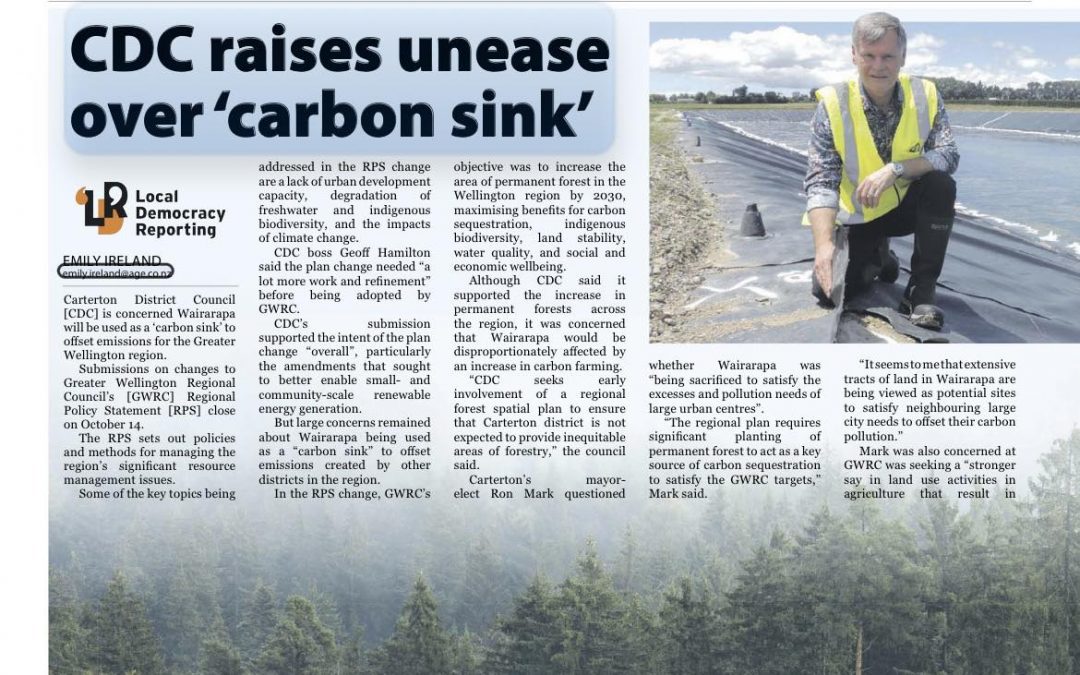 Carterton District Council has made a submission to Greater Wellington Regional Council’s Proposed Regional Plan Change. We have prepared a summary of our submission below. The full submission can be found here

We are concerned that the Wairarapa will be used as a ‘carbon sink’ to offset emissions that are created by other Councils in the region – i.e. that the generation versus offset of emissions will be highly disproportionate in the eastern and western parts of the Greater Wellington region. CDC is particularly concerned that the Wairarapa will be subject to significant afforestation to offset emissions from the wider region.  The Proposed Plan Change also seeks to go harder and faster than the Climate Change Amendment (Zero Carbon) Act 2019 and seeks to include biogenic methane, whereas the Act specifically excludes biogenic methane.

CDC notes that the National Policy Statement on Highly Productive Land (NPS-HPL) was released after Plan Change 1 was notified.

CDC requests that any amendments to the RPS to give effect to the NPS-HPL be undertaken via a variation or a separate future plan change, as the consequences of any amendments would likely be significant and should therefore be subject to a full and separate Schedule 1 process

We make similar comments re the NPS on Indigenous Biodiversity in our submission.

Use of Freshwater Planning Process

CDC is concerned with the breadth of the Plan Change content that is considered subject to the Freshwater Planning Process (FPP), rather than the Schedule 1 process. The FPP process provides limited scope for future public input, and CDC is very concerned that a large number of provisions are subject to the FPP where freshwater is not the primary issue and is instead peripheral or only one of several issues to which the provision relates. This is an inappropriate use of the FPP process.

Overall we think the RPS Plan Change 1 needs a lot more work and refinement before being adopted by the Regional Council.  We are disappointed at the timing of the Plan Change quietly issued during the middle of local body elections.  We are disappointed our request GWRC extend the deadline for consultation, to allow new Councils the ability to review draft submissions, was refused.