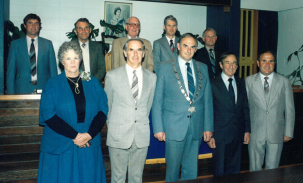 Barry was Mayor from 1984 to 1995.  He oversaw the amalgamation of Wairarapa South County Council and Carterton Borough Council under the local government reforms in 1989 and became the first mayor of Carterton District Council in 1989.

Under his leadership the transition went very smoothly. He reduced 12 councillors down to 8.

His Council’s foresight saw the establishment of the Frederick St water supply bores and a large volume of road sealing and infrastructure work.

Current staff member Wendy Maclver-Mullen remembers him as a true gentleman.  “He was very approachable and had a great sense of humour” said Mrs Maclver-Mullen.

Current Mayor Greg Lang said Barry’s passing was a sad day for Carterton.  “As the current mayor of Carterton District, I can really appreciate Barry’s outstanding contribution to our community.  I pass on to his family our sincerest condolences on behalf of Councillors, Council staff and our community that he served”.

Barry was still working in his business Taverner Keys & Co right up to his passing.