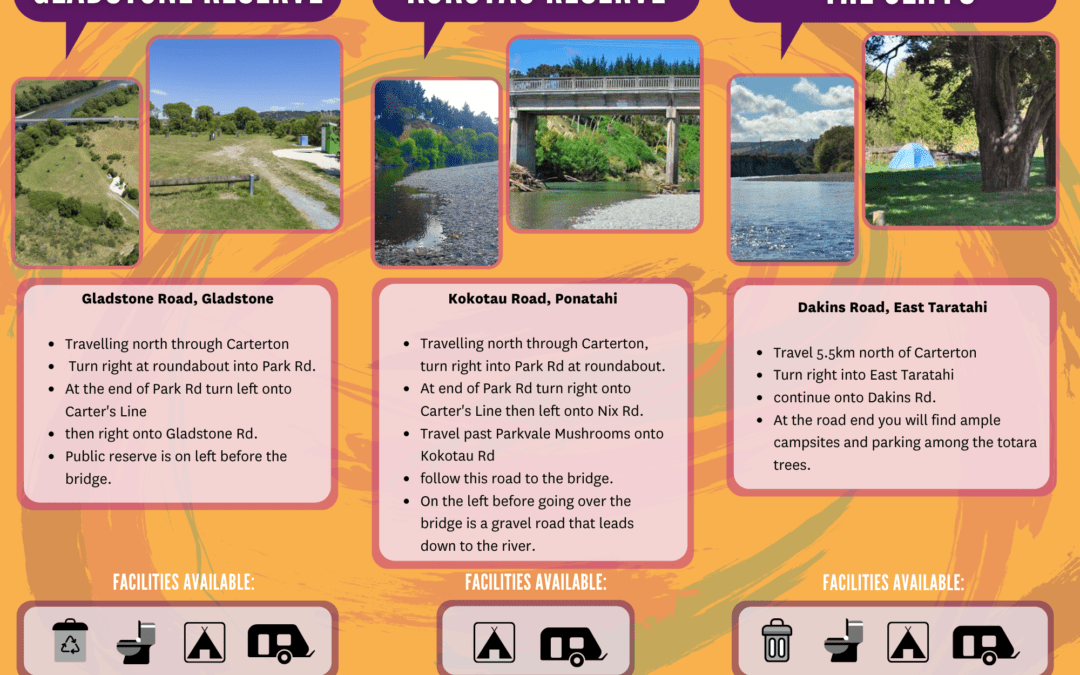 Carterton District Council has made enjoying freedom camping in the district even easier thanks to funding from central government.

COVID boarder close downs will mean more domestic tourism for NZ than usual over the summer holidays. Carterton District Council is proud to have received a grant from the Ministry of Business Innovation and Employment to enhance its freedom camping sites at Gladstone Reserve and The Cliffs. The funding received has paid for recycling facilities at The Cliffs and temporary composting toilet facilities, a vehicle counter and recycling facilities at the Gladstone Reserve.

“Over the years we have seen our freedom camping sites usage go up, so it makes sense to make improvements to these sites to further enhance the appeal of coming to Carterton,” said Carrie Mckenzie, Community Services Manager of Carterton District Council.

The CDC parks and reserves team have been working over the last few weeks to get everything in place before the summer holiday period.

“The hardest part has been waiting for the weather to settle down. The wet and warm weather has kept the Parks and Reserves team busy all over the district, so finding the perfect weather and having a team available has been a real juggle,” said Angela McMenamin project coordinator.

The vehicle counter at the Gladstone Reserve will help inform the council how often the space is being used over the summer, and whether it would be worth investing in more infrastructure in the years to come.

The council also worked hard to keep its spending as local as possible. The 2 composting toilets, one of which is wheelchair accessible, have been purchased from Carterton company Little Green Dunny, and they have already caught people’s attention. Within days of being installed, the council had received feedback from a freedom camper:

“We were delighted to find the green dunnies at the Gladstone Reserve. They were clean, accessible and ecological! Well done!”

Included in the funding was an allocation to keep the sites looking tip top so a cleaning crew can be sent out twice a week to remove rubbish and the compostable waste. This will be used to fertilise the districts flower beds creating a truly circular economy, and one with a low environmental impact.

This project runs through until Anzac Weekend in April 2021. Any questions or queries regarding this should be directed to our Parks and Reserves team on 06 379 4030.