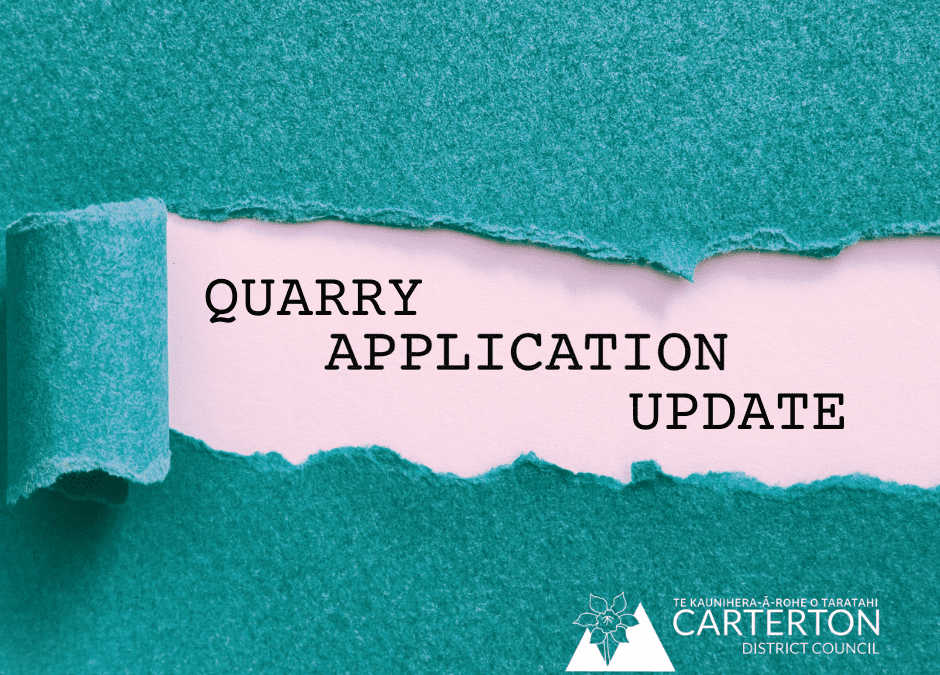 An independent commissioner has ruled in favour of the Carterton District Council by declining Fulton Hogan’s Certificate of Compliance application for a quarry in Matarawa. However, this is unlikely to stop the quarry from going ahead.

The Council has previously declined the proposed Matarawa quarry application based on uncertainty as to whether it was a permitted activity under the current Combined District Plan. The Council also received legal advice to this effect. Fulton Hogan objected to Council’s decision, which Council took into consideration and confirmed its earlier decision to decline. Because of this, the matter went to a hearing with an independent commissioner to determine the objection and activity status on 11 April. The decision was released on 2 May. The Certificate of Compliance was declined based Fulton Hogan’s intention to store its vehicles onsite overnight, which does not fall within the scope of the Combined District Plan.

While the Council is pleased with the outcome, Fulton Hogan may resubmit the quarry application and remove the proposal to store vehicles onsite.  Given the Commissioner’s decision, Council will unfortunately have no grounds to decline the application. This is because the commissioner did not consider that the proposed activity met the criteria of an unpermitted industrial activity under the combined plan. However, Fulton Hogan will still need to comply with any Greater Wellington Regional Council consenting regulations.

“Under an amended Certificate of Compliance, we have no ability to impose restrictions on the activity or limit the effects for the residents of the surrounding area,” said Chief Executive Geoff Hamilton.

“This will be very disappointing for the residents of Matarawa Road,” Mr Hamilton acknowledged.

“Council has followed a rigorous process to clarify how this quarrying activity should be treated under the Combined District Plan.  We will seek to ensure the review of the Wairarapa Combined District Plan strengthens the definitions around permitted activities to provide more clarity for future applications.”

District Plans must be reviewed and updated every ten years. The existing Wairarapa Combined District Plan is now 10 years old and due for review and renewal. This review is currently underway and is an opportunity to influence how the Council controls land use and subdivision in the District. To find out more information on the process and how to get involved, visit www.wairarapaplan.co.nz