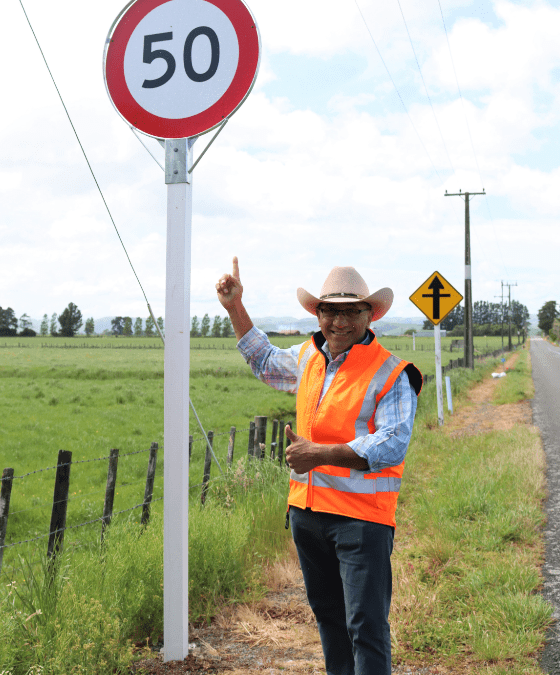 Carterton District Council has responded to community feedback over safety at a rural junction by placing lower speed signs in the area.

Notices have been erected near the intersection of Moreton and Rutland Roads advising motorists to limit their speed to 50km/h at the junction, which is to the southeast of Carterton’s central business district.

Speed signs have been changed from 100km per hour to 50km/h, with the 100km/h sign being moved to 100m after the intersection, on Moreton Road. Rutland Road also has a lower speed sign at the intersection, where a 50 km/h sign will advise road users to slow down.

The work was approved after community members raised concerns over speeds and safety at the intersection. This is in addition to safety measures already put in place in April, when a new stop sign was erected, upgrading from a Give Way to a complete Stop. CDC’s roading team updated the markings and placed warning signs 200 metres out from the turning. However, this was not enough to deter some motorists from travelling through the intersection at 100km/h without stopping.

Carterton Mayor Hon. Ron Mark was pleased the council had listened to residents and responded to their concerns, but said it was important road users adhered to the new safety measures for them to work.

“Council already made changes after community members raised concerns, but we need people to please slow down,” Mayor Mark said.

“We want to keep our community safe, and everyone has a part to play – we all want to be here for Christmas”.

The speed reductions are already in place, with a District-wide formal speed review set to take place in 2023.