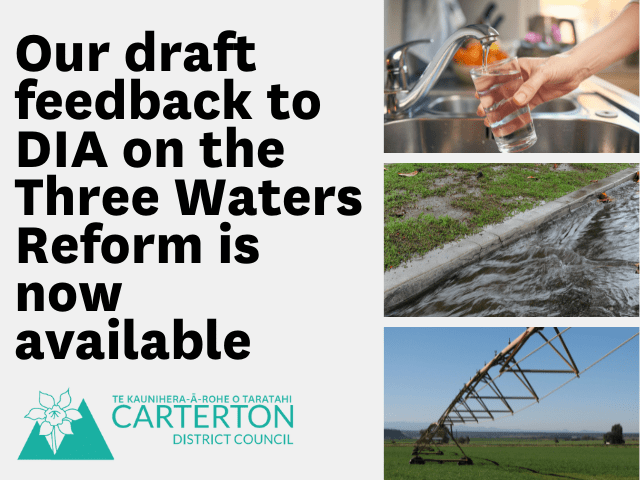 Carterton District Council is preparing to submit its response to the Government’s Three Waters Reform proposals on 1 October.

Chief executive Geoff Hamilton has written a draft letter to be sent to the Department of Internal Affairs on behalf of the Council, outlining its extensive feedback on the current proposal. This will be tabled for discussion at the Council’s Policy and Strategy committee meeting on Wednesday 29 September.

Mayor Greg Lang and Mr Hamilton have also written a letter to be sent to all Carterton ratepayers summarising the response and detailing the Council’s position. This will be sent out following Wednesday’s meeting.

The agenda and a full copy of the draft feedback to DIA is available now at www.cdc.govt.nz/threewaters

In July, Central Government asked all Councils to analyse and respond to its proposal on changes to drinking water, wastewater, and stormwater [the Three Waters] by 1 October.

The proposal advocates four Water Service Entities [WSEs] taking management of water infrastructure and planning responsibilities from Councils. If the proposal was to go ahead, Carterton District would be part of an Entity with other districts and cities stretching along the east coast, from East Cape to the top of the South Island. It may also include the Chatham Islands.

The purpose of the eight-week period was to allow Councils and Councillors to understand the proposed model, and how it can be strengthened. The Government has not yet asked Councils to make a decision. At this stage we still believe Councils will be able to choose whether they can opt out of being part of the new entities proposed in the reforms, but this hasn’t been confirmed.

There will likely be changes on the Government’s proposed model based on Councils’ feedback but Councils are now waiting to hear what the next step is in this process.

Before sending feedback, Carterton District Councillors and officers analysed the proposal in great detail, and its impact on the community. Mayor Lang stated that on the face of it, there’s a temptation to dismiss the proposal and front a pushback campaign. But there were many things to consider, including analysing the current state of Carterton’s water infrastructure, and considering the cost, environmental impact, water quality, population growth and infrastructure management of the change.

“We will by no means be going along silently with a narrative that does not fit the needs of our community, but by following the correct process our united voice will have more effect,” said Mayor Lang.

“The important thing to note is that the intention of the reforms is about achieving the best outcome for our communities with the provision of drinking water, wastewater and stormwater. It needs to be about affordability, reliability and quality. That’s got to be our top priority, and therefore it’s worthwhile giving this process its due diligence.”

The feedback to the Department of Internal Affairs will reflect these aspects, and the importance for water networks to be affordable, reliable, and of high quality. The Council welcomes all residents to read its extensive feedback to DIA and discuss it with any of the elected members.

The Policy and Strategy meeting will take place at 11am on Wednesday 29 September at the Carterton Events Centre. The meeting will be open to the public but there will be limited attendance numbers allowed due to Alert Level 2 restrictions. However, the meeting will be livestreamed via our Facebook page and a recording available on our website after the meeting. Anyone wishing to speak at the public forum needs to please register with our office no later than 24 hours prior to the meeting by calling 06 379 4030. The agenda and a full copy of the draft feedback to DIA is available now at www.cdc.govt.nz/threewaters