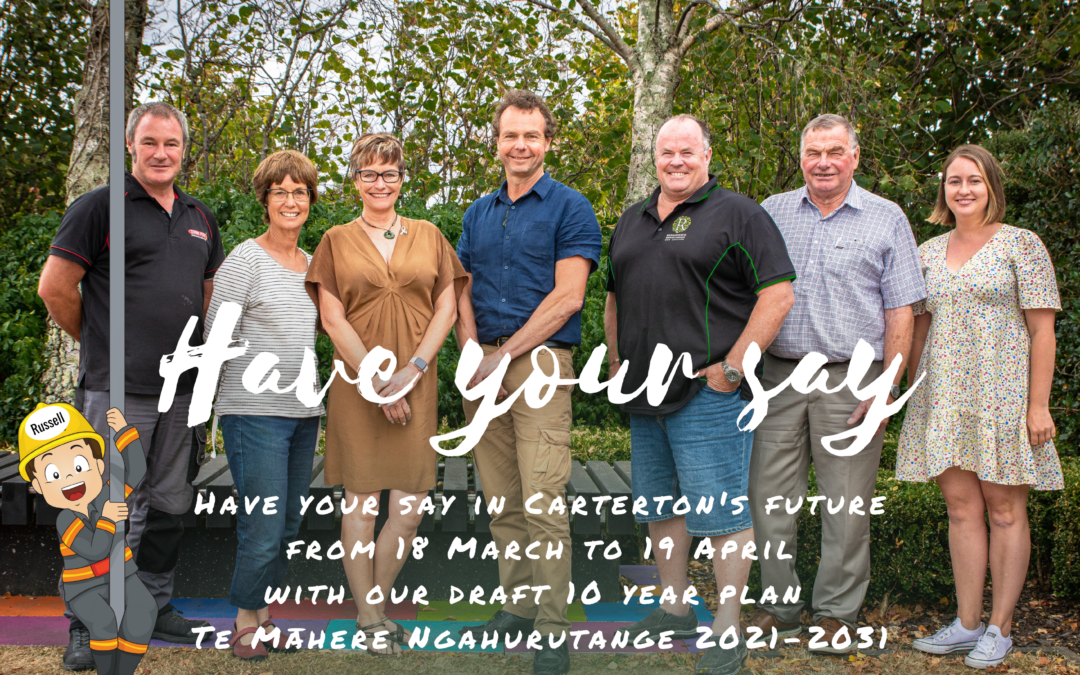 Carterton District Council has finished preparing its Draft Ten Year Plan for 2021-2031 and is looking to adopt both the draft plan and consultation document at its Ordinary Council meeting on Wednesday 17 March.

The Council’s Ten Year Plan sets out its planned activities and projects for the next ten years. It will be largely ‘business as usual’ for most of the Council’s activities for the next 10 years, with the most financially prudent approach being taken for ratepayers. This means continuing to invest in core infrastructure, seeking a new water source for the town supply, finishing the wastewater treatment plant upgrade and creating new infrastructure to enable development in the Eastern Growth Area. The Council has also factored in the costs of rates and its ability to borrow to fund new infrastructure.

As well as this, the Council has factored in the 715 ideas submitted by the community in the “Big Jar of Ideas” last year. Elected members considered all 715 ideas which helped inform the projects and activities in the Draft Ten Year Plan. The Council has come up with three projects it would like the community’s feedback on before making any final decisions – increasing town centre car parking to cater for ongoing demand, proceeding with Trail 1 of the Five Towns Trail Project and asking how much involvement the Council should have in the Town Centre Redevelopment.

Mayor Greg Lang said he was really pleased with process so far and was proud of the work the Council had put into a draft plan which reflected the community’s needs.

“I was thrilled with how many people got involved with the Big Jar of Ideas last year and the amount of people who told us what they thought our district needed,” Mayor Greg Lang said.

“Our Council believes this plan really sets out the direction of Carterton’s future by ensuring we’re financially responsible, that we look after the future of our core infrastructure and includes new projects which will benefit all communities in our district.

“It’s really important everyone reads about these projects, considers each one individually and talks to your elected members to ask any questions you may have.

“We are truly reliant on people having their say and getting involved. We take into consideration everyone’s point of view before making a final decision. I cannot emphasise enough how important it is to not let this opportunity pass you by to have an input on what happens in the District.”

Other smaller projects in the plan include climate change mitigation activities, increasing the transfer station opening hours a bit, partnering with Hurunui-o-Rangi marae to tell the stories of the first people of Taratahi/Carterton District, developing an affordable housing action plan and doing minor improvements to the outdoor swimming pool.

The draft plan and consultation document are set to be adopted by Council at its Ordinary Council Meeting at 4pm Wednesday 17 March. This meeting is open to the public and will be livestreamed via the council’s Facebook page. The consultation period will then run from 18 March until 19 April. The consultation document will be delivered inside the 24 March edition of the Midweek newspaper, with spare copies available online and at the Council office on Holloway Street. For more information on how to get involved and to view the Draft Ten Year Plan in full, visit www.cdc.govt.nz/tenyearplan