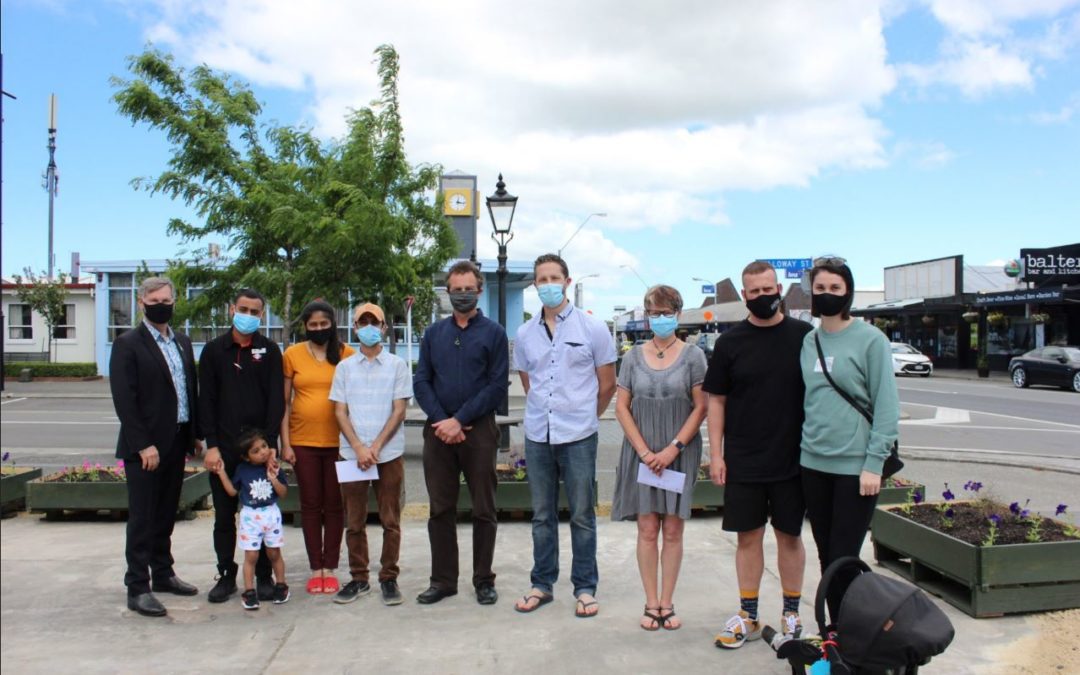 Recipients of the donations were those affected by the blaze on 7 October, which included Carolyn Watkins of Madame Plum, Jordan McDowall and Louise Skipper of Barbershop Jordy, Dan Broughton of Wairarapa Web Design, Pruthu and Pooja Patel of Carterton Food Market, and building owners Vijay and Soraj Patel. The group met onsite which is now lined with planter boxes provided by Carterton District Council.

The community contribution coordinated by the council amounted to almost $11,000, including a substantial gift by Jillayne McGregor at Property Brokers. There were additional generous fundraising efforts from other locals, such as a raffle organised by Elaine Leggott, and a collection from the team at Page 42 Café and Gelato bringing the total to $13,755. Many others in the community contributed by offering services and donating items.

Mayor Greg Lang said he received offers of support from as early as the morning of the fire, including a call from Quality Demolition and Contracting, who quickly volunteered their services to help clear the site and safeguard the area.

“I would like to thank all those who lead those various campaigns. That sort of support is an outstanding contribution,” Mayor Lang said.

“I acknowledge the faith the community has in our town centre. I would also like to acknowledge specifically the Carterton Volunteer Fire Brigade, who put themselves at real risk for our communities.”

Mayor Lang said he was heartened by how those affected by the fire had shown their commitment to Carterton.

Building and site owners Vijay and Soraj Patel gratefully received their donation and will be paying it forward to the Carterton Volunteer Fire Brigade and the business owner of Carterton Food Market, Pruthu and Pooja Patel.

Pooja Patel said while the fire was devastating, it was in the past and their focus is now on the future.

“We want to say thank you to Quality Demolition and Contracting, the fire brigade, the Mayor and the council team and especially the community. They have come up to us and show sympathy wherever they see us.”

Jordan McDowall and Louise Skipper were set to open a barbershop on the site and would still like to set up in Carterton in the future.

Jordan said the community was really engaged he felt obliged to keep going here in Carterton.

“The conversations we shared with our neighbours made it a better process. It’s difficult but we definitely still want to do something here in Carterton,” Jordan said.

“Carterton is the next boom and we want to add something to the town,” Louise added.