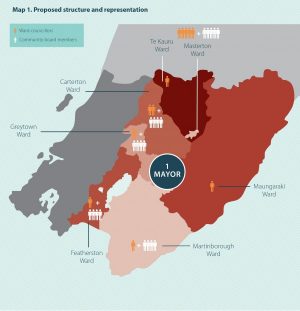 Visit the Local Government Commission website for a full overview of the proposal , the details, and what happens next.

On Tuesday 18th July, the Local Government Commission briefed the three Wairarapa councils on the final proposal of the Wairarapa District Council.

Local Government Commission Chair Sir Wira Gardiner says the fate of a final proposal released today – for a combined Wairarapa District Council – lies in the hands of the Wairarapa public.

“The Commission is confident that the final proposal it has released today will have many advantages for the Wairarapa in capturing opportunities now and meeting the challenges of the future,’’ Sir Wira said. “There is strong support across the Wairarapa for the proposal.

“Whether it goes ahead or not is now up to the Wairarapa, which can call for a poll. A simple majority will determine the outcome.’’

Under the proposal the three existing Wairarapa councils – South Wairarapa, Carterton and Masterton District Councils – would be combined into one medium-sized local authority, called the Wairarapa District Council. Regional council functions in the district would continue to be carried out by the Greater Wellington Regional Council.

Sir Wira said that he and his fellow commissioners had reached their decision after careful deliberation.

“The Commission has listened to local government leaders, councillors, iwi, business leaders, the rural sector, community leaders and residents from all walks of life throughout the Wairarapa,’’ he said.  “We have also considered expert evidence, and conducted independent surveys to seek a range of views from across the district.’’

Sir Wira said that the Commission had been assisted in reaching its decision by all the people who had engaged in the reorganisation process over the past two years. This included those who had attended public meetings, drop-in centres or information stands, others who had made written submissions or spoken at a hearing, or simply read and commented on the Commission’s materials.

“We wish to thank all the members of the Wairarapa community who have helped us get to this point. We feel privileged to have heard strong and considered views from across the spectrum.

“It is obvious to us that many in the Wairarapa care passionately about local governance, and I’d like to pay particular tribute to those whose robust and thoughtfully composed opposing submissions challenged us to consider the evidence carefully.

“We have done so and are convinced the final proposal will deliver better local government for the Wairarapa including strong democratic local decision-making, cost-effective infrastructure and efficient services. We are happy now to hand it over the Wairarapa people – who we fully expect will want to have the final say by requesting a poll.

“We encourage the community to exercise its democratic rights in this respect. This is your chance to shape the future of your district and your community.’’

Carterton Mayor John Booth agrees that the decision needs to be made by the Wairarapa community. “I believe Carterton will initiate a petition to push for a poll. This is the time where we have the ability to exercise our democratic right to vote.” Mayor John Booth is also encouraging the community to discuss the amalgamation. “Chat to everyone, especially our youth. This decision is about the future of the Wairarapa and we need to make sure we are including young people in our discussions.”

What is proposed – in brief

Visit the Local Government Commission website for a full overview of the proposal , the details, and what happens next.

Copies of the final proposal are available at www.lgc.govt.nz and are available for viewing at Carterton District Council Office and Carterton Library on Holloway St. Copies are also available on request to the Local Government Commission at info@lgc.govt.nz; or by phoning 04 460 2228.