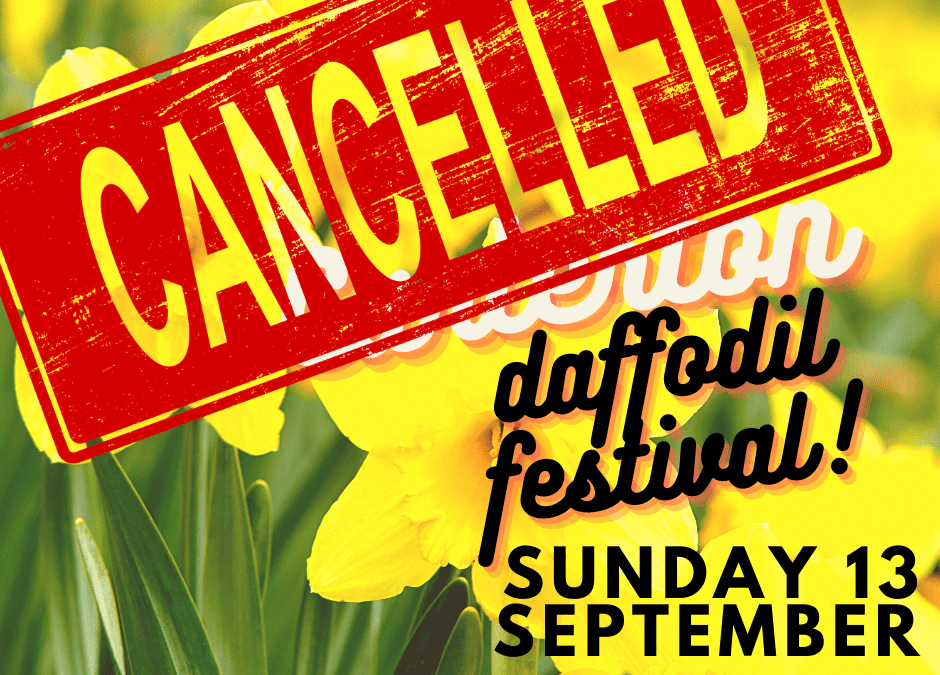 Carterton District Council is disappointed to announce the cancellation of the 2020 Daffodil Festival due to today’s announcement from the government that Wairarapa will remain in alert level 2 until at least 16 September.

The council has been planning and preparing for months in hope that the iconic festival could still go ahead. However, in previous year’s the popular festival has attracted up to 10,000 people, and level 2 restrictions require gatherings of no more than 100 people.

“We’re really disappointed that we aren’t able to bring people the fantastic festival they’ve come to know and love, and we know there will be many people who feel just as disappointed as us,” said Community Services Manager Carrie McKenzie.

“We knew cancelling due to Covid was always going to be a possibility, but we did everything we could to keep our planning on track as we know how important the Daffodil Festival is to both our community and visitors.”

Mayor Greg Lang is also disappointed about the cancellation but said keeping our community safe and adhering to government guidelines takes priority.

“I’m really proud of the hard work put in by the council staff, Carterton Lions and volunteers to keep the event on track, and I know how disheartened they are with having to make such a difficult decision,” he said.

The regional tourism organisation, Destination Wairarapa, is encouraging visitors who had planned on coming to Carterton for the festival to still do so, while adhering to social distancing measures, wearing mandatory masks on public transport and keeping track of where they have visited.

“It is such a shame the Daffodil Festival can’t go ahead, but there is still plenty to do in Carterton including the Big Wai Art Sale and a super-sized Spring Farmers’ Market in Memorial Square. With Spring now here, the countryside is looking a picture,” said Destination Wairarapa marketing manager Barbara Hyde.

Masterton is also packed with opportunities for families, and in South Wairarapa there are great shopping experiences to be had, particularly in Greytown, she said.

“Carterton is at the heart of all this, so we really encourage locals who have friends and family coming to stick with that plan.”

St John’s Ambulance and Plunket rely on money raised through daffodil sales as part of their annual fundraising. Thanks to the generosity of the Booth family who own Middlerun Farm, and support from Carterton District Council, people will still be able to purchase daffodils on Saturday 5 September from the Events Centre Te Mahau Foyer from 10am.

Those who have already purchased tickets for the steam train ride will be contacted directly by Steam Inc.