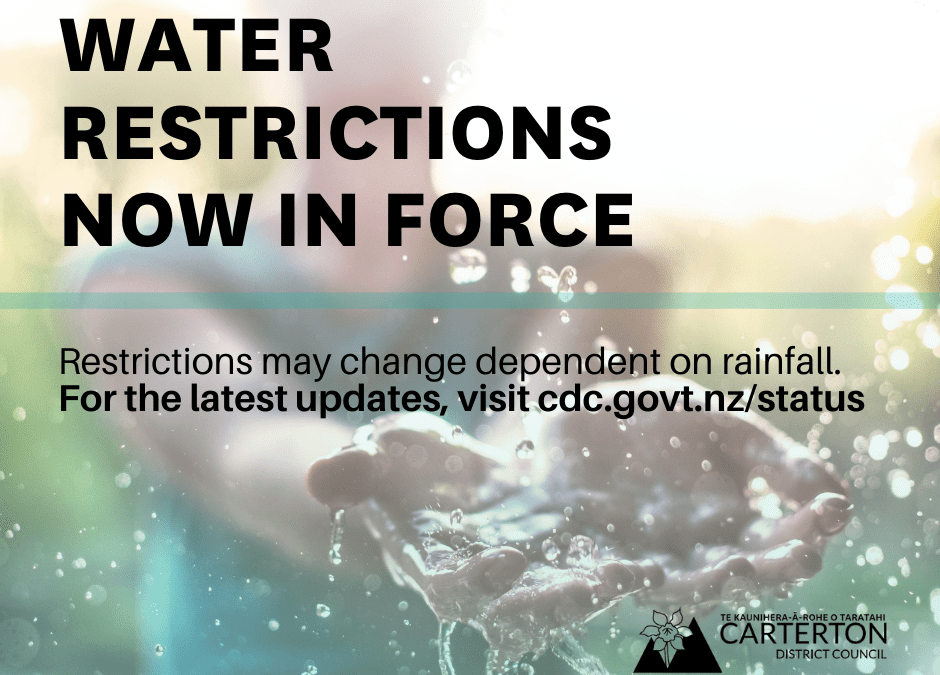 Carterton District Council has made the difficult decision to put water restrictions in place after water flow charts show excess water consumption during peak times, putting too much strain on the bores which supply the urban water source.

The current restrictions are handheld hoses on alternate days, with effect from Thursday 28 January (odd numbered houses on odd days, even houses on even days).

The Kaipatangata Stream is one of the two water sources for Carterton’s urban residents and is reliant on rainfall. When the stream is low the water supply is reliant on our bores, but there is limited storage capacity at the bores. The council took a different approach this year, allowing residents to use sprinklers and hoses but asking them to avoid using them and any other non-essential water use during peak times. Peak urban water use is between 6.30am – 10.30am and 5.30pm – 7.30pm.

While the new approach seemed to be well received by the community, the urban water use has remained high at the peak times of the day that we really needed to conserve water.

“We know many in the community have worked hard to conserve water this summer to try and make the new approach work. However, most of the urban water consumption has been during peak times which has not allowed the bores to produce water fast enough to keep up with the demand,” said Infrastructure, Services and Regulatory Manager, Dave Gittings.

“This not only hinders the council’s ability to supply urban drinking water, but seriously compromises the district’s firefighting abilities. There’s no way the bores can continue to sustain the current level of water use without rainfall or imposing restrictions.”

The council is currently working to install additional short-term storage to help manage the peak use periods, but collective use needs to be kept under the threshold until this is in place.